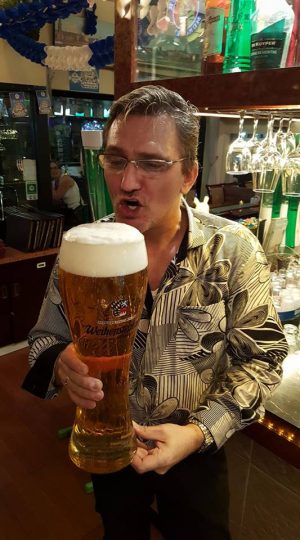 Bon Viveur, raconteur and mien host extraordinaire,  Guido of G’s German restaurant told us moving his restaurant from Patpong Soi 2 to Silom soi 4  just over a  year ago was the best thing he ever did.

At the current larger location G has expanded his popular beer range to 100’s of products, which include the full Bel Bev range. He has now labeled his incredibly popular German restaurant ‘Embassy of Beer’ and when you look at the fridges stuffed with beers from all over the world you can see why.

The new restaurant has 3 floors and plans are afoot to expand the business into the upper floors to cope with the increasing popularity and the fact there are many times when times when there are just no tables available.
With a restaurant as popular as this its always a good idea to book in advance!

For BelBev it has been great to watch the expansion of G’s from a small restaurant next to Foodland on Patpong just a couple of years ago, to the incredibly popular place it is today.

We do recommend anyone who is in the area to try some of the great homecooked German food but please…stay with the Belgian Beer…its the best!