Greetings, Beerbarians. Bangkok Seven here. Today I offer this personal venture into a complicated beer, hence the somewhat confounding title. Let us try to unpack the enigma that is Lambic-style beer and one of its best brewers: St. Louis.
Lambic beer is a style of Belgian sour, created by exposing the wort to wild airborne yeast and bacteria specific to the region. Most are combined with tart fruits like cherry (kriek) and raspberry (framboise), as well as less-sour ones like peach. The process of infusing the fruit typically takes two years. Gueuze, however, is spared any fruit additives. Don’t let that fool you, though. Gueuze still retains sour, citrusy flavors similar to barrel-aged ciders. Many call it the “Champagne of beers” because its characteristics mimic that of the famous French bubbly. 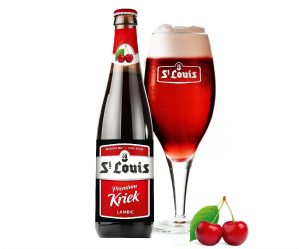 My torrid affair with Lambics began 15 years ago when I was still trapped in the prison of the United States. I was introduced to St. Louis Framboise by my girlfriend at the time. We were out late one night, driving PCH along the coast north of Malibu in my convertible Mustang. It was a warm, clear night. We decided to grab a beverage and lie on the beach to gaze at the stars. As I pulled up to the liquor store, she leapt from the car like a deer and bounded inside. By the time I parked and joined her, she was already at the counter with four bottles of Framboise. “What the hell is that?” I asked. “Trust,” she replied, as she scooped up the bag of beers and strode out to the car.

We wrapped a quilt around us and squatted on the sand, casting our eyes star-ward, and sipped from our bottles to the rhythm of the surf. The taste was unlike any I’d encountered before. “This isn’t beer,” I told her. “Yes it is. It’s Lambic,” she said. After that, the night became a blur of stars, blonde hair, and raspberry kisses. My ex didn’t contribute much to my life, but the introduction to Lambic is at least one thing I can thank her for.

In the years following, I sought out different Lambics in specialty shops—namely cherry and peach flavors, although the raspberry was hands-down my favorite. Flash-forward to 2019 Bangkok, and sour beers have become something of a fad. And no wonder, since their crisp, refreshing qualities pair perfectly with Thailand’s climate. There are precious few pubs in my neighborhood that sell it. O’Malley’s on Silom Road provides the most convenient access. They’ve got a fridge full of St. Louis Kriek that calls to me like a flock of sirens (herd of sirens? school of sirens? Whatever). Thankfully all 4 flavors—Gueuze, Kriek, Framboise, and Peach—are available for order from Belgian Beverage Asia. But enough foreplay. Let’s break ‘em down…

St. Louis Gueuze
St. Louis beers are made at the Van Honsebrouck brewery in Ingelmunster. They produce a handful of premium brands, including Kasteel and Bacchus. St. Louis Gueuze is unique for several reasons. First, it’s the only Gueuze produced in West Flanders, the furthest producer geographically from Brussels. Second, it’s filtered. Initially it is fermented in oak barrels before being transferred to bottles for an additional round of fermentation. The color is bright amber with a humble head of foam. The taste is perfectly balanced between sweet and sour, often with notes of apple, citrus, and even strawberry. At 4.5%, it makes for an easy-drinking and refreshing beverage on a hot, humid day or sultry night in Bangkok.
Now, I’d never actually tried Gueuze before, so I made a special trip to G’s in Silom to give it a go. And just as advertised, it was sweet and sour, and also slightly bitter, and somehow…”organic” is the only word I can think of to describe it. My brain screamed “cider!” and “beer!” simultaneously. It tasted like what I’d expect a magic potion from a storybook fairytale to taste like. If Disneyland ever build an adult version of Mr. Toad’s Wild Ride, it would be apropos to hand each rider a Gueuze before boarding. 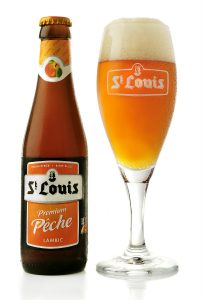 St. Louis Peche
I’d never had this one either, so I schlepped down to O’Malley’s on Silom Road for one. At 2.6%, this Lambic-peach juice combo more closely resembled a soda than it did a beer. But the flavor was quite nice, and left me feeling peachy. If you want something to refresh you on a hot day without getting you drunk, this fruity concoction might be just what the witchdoctor ordered. It is robust with peach flavor, if not intoxicant.

St. Louis Kriek
The cherry version is a bit stronger than the peach at 3.2%, but again if your goal is to drink long without getting smashed, it’s a safe choice. The flavor is a cherry-coated punch to the senses. Sweet, tart, and ruby red, it was hard not to smack my lips and say “Ahhhhhh” after every sip. I think what’s truly special about Lambics are their ability to retain the qualities one expects in a beer while at the same time being imbued so completely with the flavor of fruit.

St. Louis Framboise
Oh sweet Framboise, with your nostalgic grip on the short-hairs of my past. How do I love thee? The raspberry version is 2.8%. Today, when I drink it, I can’t tell if I’m intoxicated by the memories, or the mystical raspberry essence, or the alcohol. Maybe it’s a combination of all three. With its pink foam head and garnet color, you might at a glance mistake it for a soft drink. That is, until you taste it. The sweet-tart flavor of raspberries is most prominent, trailing off to slightly bitter tones and a pleasant acidity that lingers like the endorphin afterglow from a lover’s kiss…or maybe that only happens to me.
For your next outdoor picnic or foray to the beach, consider toting along one or all of these Lambic varietals. They’re a perfect complement to a hot day out, and can be ordered online at belbev.asia, your one-stop Bangkok shop for premium beers and liquor from around the world. Until next time, friends, keep your brew chilled, your glass full, and here’s to the fine fellas from Flanders and their Lambic sensations. Cheers!